Small amounts of mucus are normal in the nose and sinuses as this mucus acts to trap and filter bugs from the air like a spiders web (natural air filtration).

Sinusitis is a build up of excessive amounts of this mucus in the sinus and nasal passageways. The excessive mucus prevents airflow and creates increased ‘pressure’ in the sinuses which causes significant discomfort and pain. Furthermore if the bugs trapped in the mucus are not cleared they can cause sinus infection and further fucus buildup creating a vicious cycle of chronic sinusitis.

There are many things that can cause a build up of mucus in the sinuses.

– Allergies: Allergies cause an increase in mucus production on the nose. This increase in production can sometimes overwhelm the normal mucus clearing processes and cause blockage

– Structural changes: a deviated septum or small nasal passages can reduce the normal clearance of mucus. If mucus can not be cleared normally it can build up causing sinus congestion

– Mouth breathing: nasal airflow is important to aid normal clearing of mucus and bugs in the nose. If you can’t breathe through your nose you can’t flush the sinuses with clean fresh air

How can we treat sinusitis?

In order to treat sinusitis we need to remove the traffic jam of mucus from the nose and sinus passages. This often involves treating the cause (e.g. allergies), loosening the mucus (ultrasound and saline) and clearing the mucus (sinus clearing protocol). In people with recurrent sinus issues establishing a regular sinus hygiene program will help flush the sinuses on a regular basis to PREVENT further build up of excess 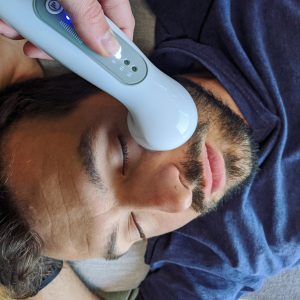 What is the Sinus Clearing Protocol?

For best effect our sinus clearing protocol is used in combination with therapeutic ultrasound which acts to first loosen the mucus making it easier to clear.